Difference between revisions of "Operation Jörmungandr" 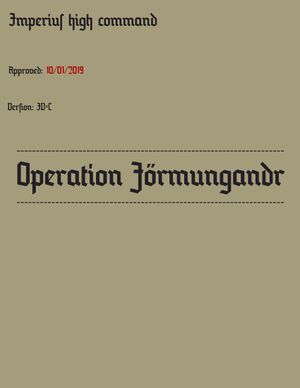 Operation Jormungandr was an Imperius emergency response plan to mobilize vast portions of the Fjellsoldat towards all border territories in the case of a situation wherein an outbreak of total war, and an invasion by Kythira has become extremely likely.

this operation was fully activated during the events of the Dervich Incident, wherein the relations between Imperius and Kythira had deteriorated so quickly that a situation of total war had become highly probable.

Meaning of the Operation,

The name of the operation itself, is a direct reference to the creature from norse mythology known as the World Serpent or simply Jörmungandr, which is a dragon-serpent like creature that eventually grew so large that it could encircle the entire earth,

the operation hints to it in function due to its majority focus being creating a stranglehold on the whole of the Imperius-Kythira border, by effect “encircling the world”

Once the Operation itself had been approved for activation by the Fjellsoldat command, immediate orders where to be send to all general or higher ranking officers, these were unique for each major battlegroup, all of them being moved to various different positions amongst the western border the Imperius territories,

battlegroups where largely setup to staff all pre existing defensive positions, and quickly construct more, such as trenches and dug in towed-catapult & trebuchet positions

furthermore, large portions of naval ships, ranging from light scout crafts to large heavy cruisers were moved along the coastline to ensure no Kythiran landings could be made and to prohibit any Kythiran vessel from entering deeper into Imperius waters,

Lastly, the Elite Dragesteiner Royal-Guard forces where set to immediate standby, to ensure the continued safety and there by function of all government bodies from within the Reich’s Capital city of Imperia.

The idea of this operation was to ensure that the whole of the Imperius border would become an equally spread, impenetrable wall, giving the Kythiran forces no change begin any spearhead into the Greater Imperius territories, to then, have the Fjellsoldat end up in a position wherein if needed, they could tactically move in other battle groups to start forming their own spearheads into Kythiran territories, these now being covered by long range artillary units, these would have been likely situated amongst the northern coast nearby the Kythiran Capital of Kythira, Wherin a siege of the city would be achievable in a relatively short time period.

If such was all achievable remains debated by scholars of Imperius and Kythira alike, however, that this would result in devastation on a scale comparable or even greater to that of the great grief is likely inevitable.