The White-Gold Tower is one of the oldest and most important buildings in Minecraftia. The world's largest building in terms of volume, it functions as the cultural, economic and political heart of the Kythiran Empire.

Originally the White-Gold Tower was a much simpler stone Satanic cathedral created by King Mercenary during the late Second Era. It was the last major construction project of the Kingdom of Helmsdeep, and at the time of its creation the largest building in the world. It fully survived the Great Grief and the Minecraftian Dark Ages, after which it became a part of the new city of Helmira. During the Third- and Fourth Era it underwent several massive renovations and expansions, the latter especially underground. 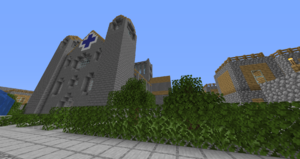 The White Gold Tower during the Second Era in Helmsdeep 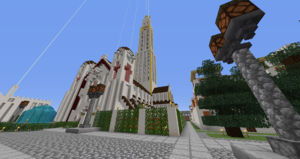 The White-Gold Tower during the Fourth Era

The name refers to the largest of the three towers of the structure, a grand tower of white quartz and solid gold, which houses one of the Emperor's offices.

Consists of the lush gardens, where the nations of the Second Era are remembered. There are stairs that lead down to a burial chamber located under the Throne Room.

The Throne room is a massive decorative hall, which is focused on the Diamond Throne, the seat of power in Kythira. Two small statues commemorate the Great Grief and the Chicken Incident. Two massive staircases lead down to the underground portions of the White-Gold Tower.

The Tower of the Crown Prince

The Tower of the Crown Prince is a 32 meter tall tower and a place within the palace for the Crown Prince to work. It consists of a small lobby, an office for his secretary, and his own office.

The Tower of Hand

The Tower of the Hand is a 32 meter tall tower and the place of work and residency for the Hand of the Emperor, a position currently in the hands of the commander of the Kythiran Legion. It consists of a bedroom and an office.

The Palace's most recognizable feature. Towering above the city of Helmira, this tower of white quartz and pure gold, houses offices for the Crown, namely the Emperor, the Crown Prince, the Grand Marshal and the Prime Minister, as well as offices for five State Secretaries.

The tower was changed several times throughout its existence. The original tower was constructed by Helmsdeep craftsmen during the Second Era, which was only 44 meters tall. Today, the tower stands at 155 meters tall. This is shorter than it was during the Third and early Fourth Era, when it stood at a taller 181 meters. However, reconstruction efforts during the late Fourth Era resulted in significant changes to the tower, which included its height.

During the late Fourth-Era, a clock was added to the tower.

The Great Hall is the central underground room, which connects all portions of the complex.

The Imperial Theatre is seats 108 people, plus the Crown Prince and Emperor, totaling 110 seats. It is the most important theatre in Kythira, and is primarily used to display plays about the battles between the Kingdoms of Kythira and Helmsdeep during the Second Era. Sometimes it is used for Ardoraghi Operas.

The largest library in the world, housing all known literary works and treaties.

The Hotel Voyage is the most luxurious hotel in Kythira, consisting of a large lobby, grand restaurant with 56 seats, or 14 tables, and live music, 24 rooms and 2 grand suites, indoor flower gardens made by the finest garden architects in Kythira, indoor pool with sauna and a lecture / conference hall that can be hired.

The center for Kythiran trade.

Connecting the White-Gold Tower with the Kythiran metro system.

Houses the logistical bureaucratic operations of the Kythiran Empire, and includes the following:

The center of Kythiran Justice, including a courtroom, entrance to the Nether for banishment, and 28 jail cells with room for 56 prisoners. Due to this, the White-Gold Tower is Kythira's largest recognized prison.

The Imperial Museum is used to display the history of Minecraftia, and, among others, houses the following:

The Hall of Heroes

Statues of all important people whom have lived in Minecraftia

The Hall of Support

The Small Hall is a secondary hall that connects the top floor with the secondary parts of the complex.

The Hall of Seas is a showcase of the primary ships of the Kythiran Empire.

The Small Theater is a theater for smaller shows or speeches, primarily reserved for second-class citizens.

The Hall of Peace

The Hall of Peace is a hall where the Kythiran Provinces, the Kythiran Crown and dignitaries from the Imperius Reich can meet. A notable feature of this hall is a grand window in the ceiling, which is located at the bottom of the Bay of Splendour, in between the White-Gold Tower and the Imperial Palace.

The Hall of the Provincial Council

The Hall of the Provincial Council is an advisory body of the Kythiran government. It holds seats for representatives of both Golden Provinces and Crown Provinces, as well as a secondary Diamond Throne for the Emperor. Each province also has its own private apartments, where its representatives can rest or discuss matters privately.

The Ardoragh Library is a dedicated library, used to store books from the Golden Province of Ardoragh, with a special focus on the book series 'The Book'.

The Kythiran Portal Hub is a principal place for teleportation between dimensions.

The Hall of History

A display of several curated replicas and original structures from Minecraftia's history, including a recreation of the First House, based on the ruins in Oldspawn.

Hall meant for signing treaties and the display of new and old treaties, a tribute to diplomacy.

A massive grand hall which houses the Kythiran Senate. It also gives access to the following rooms:

A small hall made primarily of wood, for the High Lords of Kythira to discuss issues among themselves and with the Emperor directly.

A grand hall, with a floor made primarily of crushed bones. Two giant diamond swords with skulls below them, as well as a golden sword on the ceiling, remind those who enter about the nature of the Council.