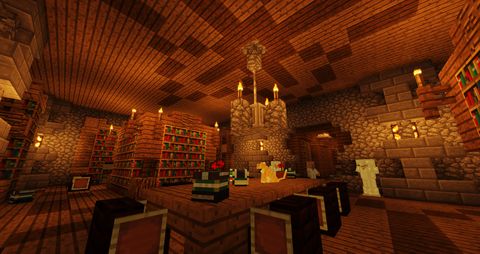 A view from inside one of the main parts of the Library.

Försliota is the world famous library that can be found in Alralysva, the capital of Ardoragh. It is located under the Cathedral Kyrkeå and can be accessed through the staircases in the Cathedral.

The Library features a grand assortiment of books for all ages. It is also the main library where The Book can be found as first once a new part is being published. It is also possible to look at art and maps from around the world. It is even possible to have a look at some old relics that have been found from the First Era.

The Library has become famous for it's many hidden parts and passages which can be found throughout pretty much the entire library, leading to many peaceful places or other parts of the library with even more books. Some parts are even to be secured by a puzzle. Groups of students tend to solve these puzzles in groups and discover new parts of the library. Tourists however are known to get lost inside these hidden parts of the library. Often they have to be recovered by the staff members or guards. There have also been two recorded incidents of people reported missing after their visit to Försliota, it is assumed they have been lost in these long and hidden paths. Their bodies are yet to be found and it is assumed they fell down in a cave where people don't tend to visit.