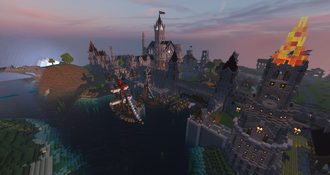 Thanks due to the scientific advances made in Alralysva it was possible to apply various feats of water management in the harbour. Further research was conducted into hydrostatics in the library of Kreonix castle.

It is said that during one of the hydrostatics experiments high lord Whazajottom von Roterstein vigoriously plunged himself into one of the viscosity meters. Historians have requested to measure highlord Whazajottom to check whether his dimensions match with the mathematics performed in the book "Rheology of minecraft fluids". High lord Whazajottom did not cooperate and refuses to elaborate any further on the questions of the historians.

Kreonix scientists are not happy about the rise of a new religion called the church of the Turtle god. They proclaim to know the origins of the Minecraftia world which the scientists have proclaimed to be pseudo-scientific nonsense.

A response was written in the form of the book "planetary physics in minecraft" by Corspin von Roterstein. The Church of the turtle god has said to remain unconvinced.