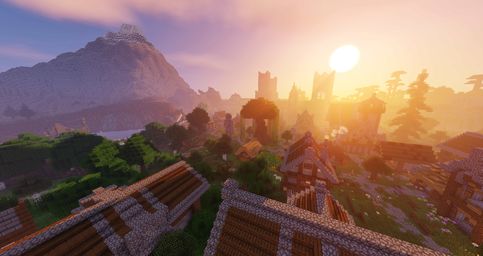 Ardoragh's capital Alralysva, with the large mountain with the fortress of Mörkren located inside it.

Alralysva is the capital city of the province of Ardoragh. It is under the rule of High Lord Whazajottom. Alralysva houses a large Cathedral with the large and famous library Försliota beneath it. This Library contains lots of small hallways and hidden paths, people have been lost in these hidden paths and needed to be recovered by staff members. The Library also houses a science division that researches into new technologies for Ardoragh and the Empire.

Alralysva has often been referred to as a natural and beautiful city. The Emperor CoetzeeClan has often made remarks about the beauty of the city.

The city offers a good defense from the outside, as the city has been encircled with a decorated wall and several towers. Most of these towers house a bridge to cross the river that also gives it a more strategic location. Even though these bridges are here, they are seldomly being used, as there are little things to be found in behind these bridges and the government would rather not have every citizen walk around inside the towers.